Of course handwriting is about learning to form then join individual letters. But it's also about the lines... the lines on paper that are there to guide and support letter formation are not always given the attention they deserve.

With every student I support (of every age - child and adult) I look at their use and awareness of lines.

Lots of pictures today as I share examples to get you thinking...

Note: Margins and top lines are for another day; for now let's focus on the horizontals!

You might not even consider what I call 'regular lines' as handwriting lines. We tend to take them for granted. Yet there's a reason why lined paper is used over plain... to guide the flow of words so they are easier to follow. In effect they help free up space in working memory - we don't have to commit conscious thought to keeping writing in line.

Many children seem to write 'between' the lines. This makes it harder to distinguish between 'tall' and 'small' letters and some don't understand that 'divers' are allowed to break through to the line below.

Baseline: letters 'floating' between the lines 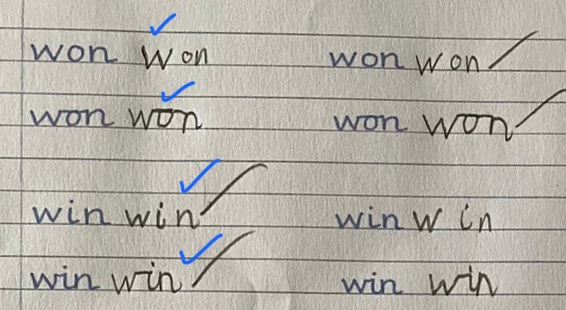 Letters starting to 'sit' on the lines 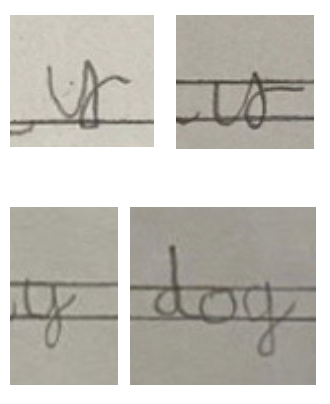 Learning to allow 'divers' to break through the bottom line

Special handwriting lines for practice can be brilliant. They can really help children get control of letter size and position in relation to other letters.

I use the word ‘can’ very deliberately because they can also cause problems! It's so important that time is spent making sure children know HOW to use them. Too often it's assumed this is obvious but it's not as simple as it might seem. Children's visual perception is often still developing and how they interpret using the lines varies. 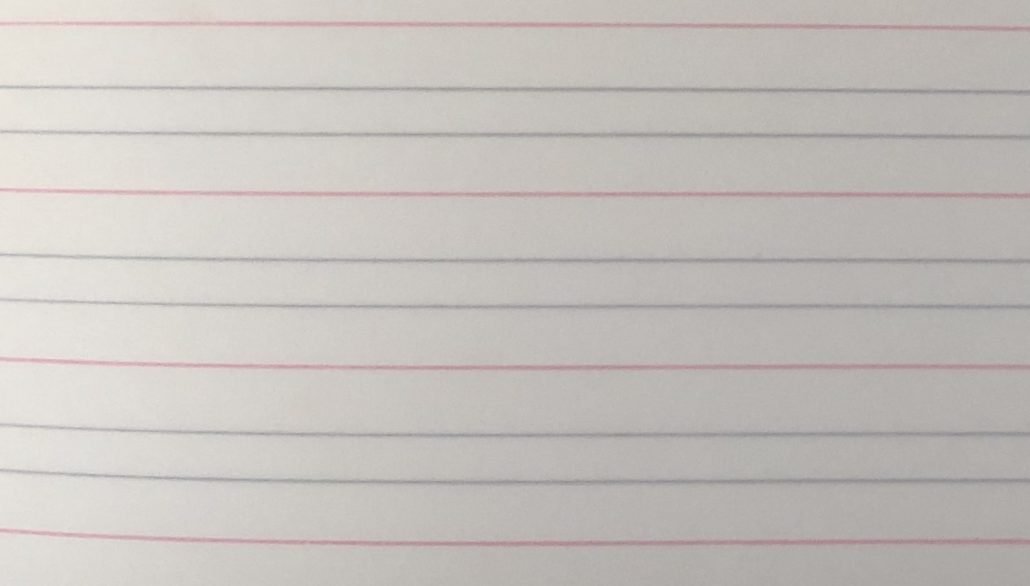 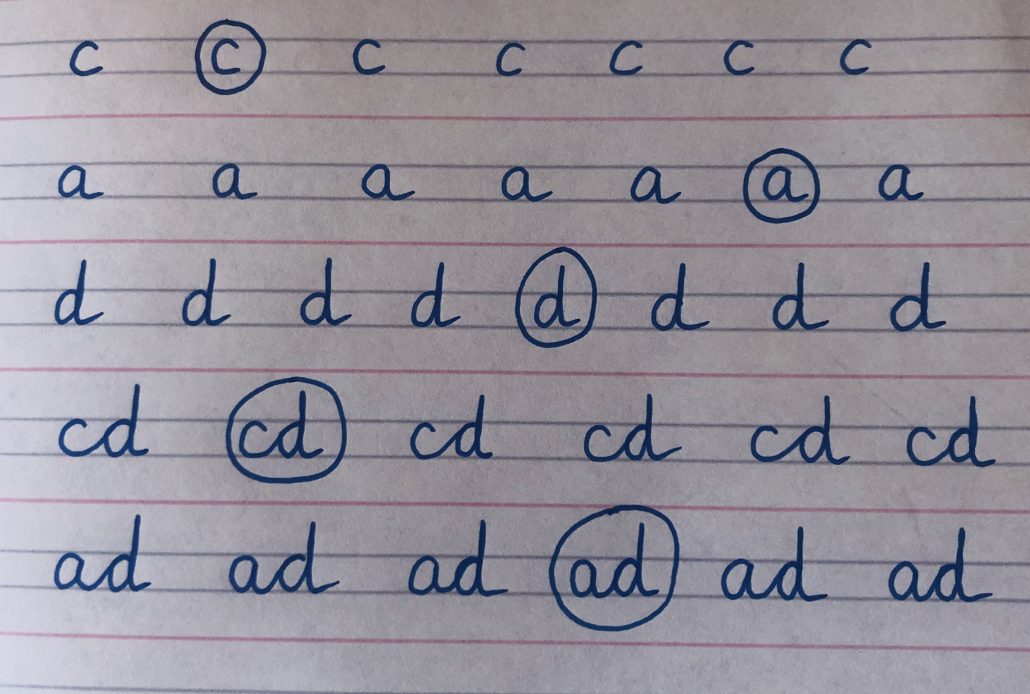 Let's have a think about some of the issues:

Children rarely look back to the start

Sometimes an example is written at the beginning of a line for a child to follow. What can happen is that children use their own last example as the place holder for the next one they write. They don't seem to see the lines and the writing drifts!

Sometimes children get muddled between 'regular' and 'special' lines.

In the example on the left the child doesn't understand the significance of the line colours and is actually writing in the wrong place.

On the right the child is using the main middle line as a regular one (well not for 'i' but for 'g' and 'h'). The confusion affects the practice.

Unnecessary use of handwriting lines

Often I wonder why children are being asked to use special handwriting lines. I think they once they have accurate letter formation and control it would be better to practise handwriting on the regular lines they are expected to use generally.

So often I hear frustration that handwriting in practice books doesn't translate to everyday work.

Well firstly, the task demands on working memory when focus isn't specifically handwriting will see whatever is automated emerge.

Secondly, switching between lines takes a while for the brain to automate and adapt smoothly. It's like switching between driving a manual and automatic car. It takes a bit of time to switch when you've been doing one more often than the other.

Thirdly... time. Handwriting practice is shorter and slower. We can all write with more control when we slow down.

It's not all doom and gloom! I love handwriting lines - children just need to be taught how to use them effectively and, in my opinion, they are best used as an intervention rather than 'just because they're handwriting lines so that's what we do'.

In this context I prefer (and have developed) much simpler lines for practice:

After watching a demonstration, the child writes between the letters so they always have a good model in view: 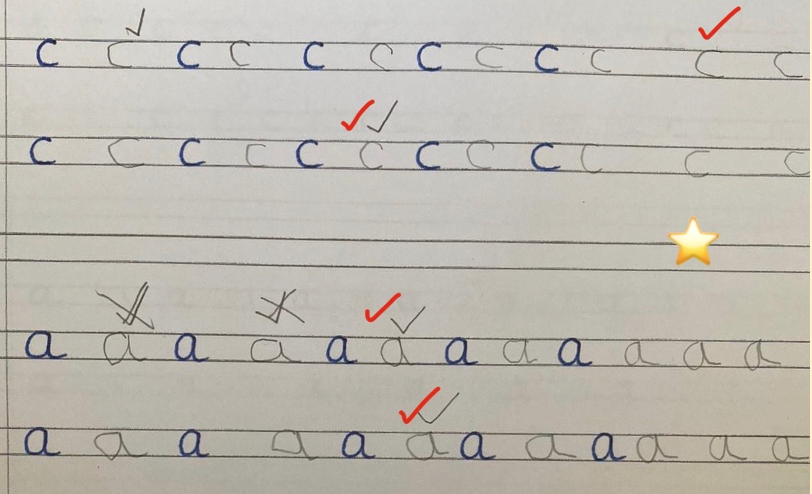 Let's look at snapshot of how targeted use of handwriting lines helped this 8-year-old : 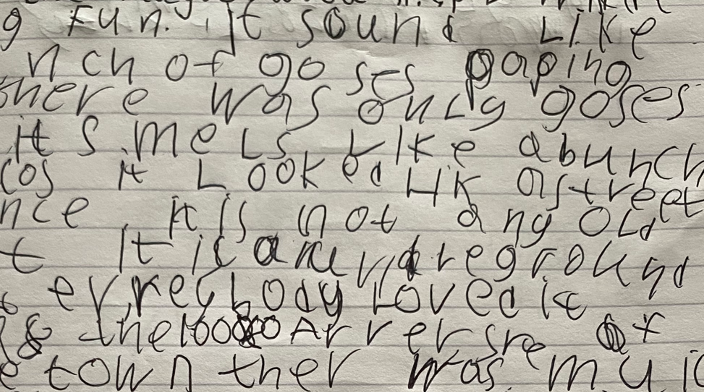 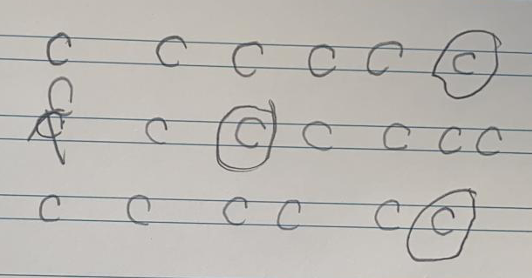 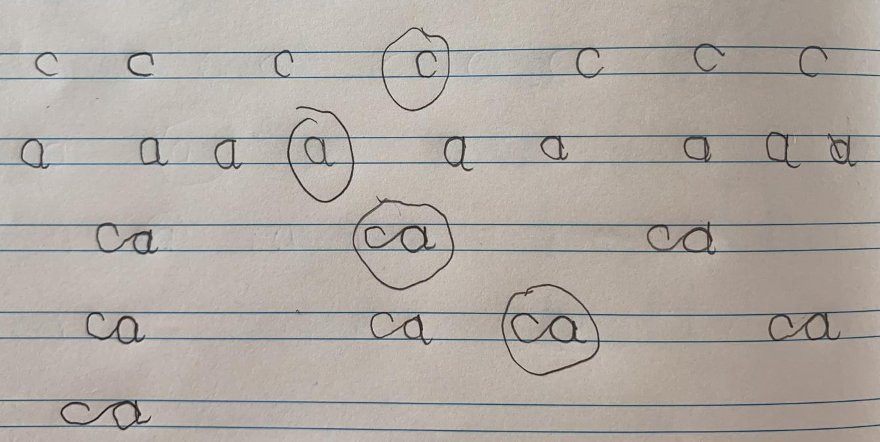 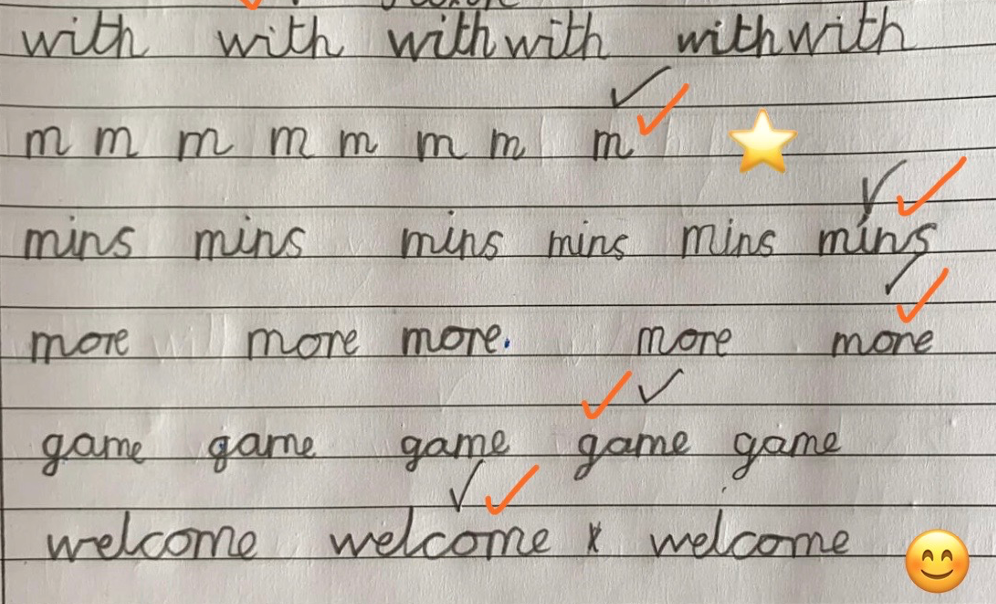 What are your thoughts about and experiences of handwriting lines?

For more information about handwriting lines or to chat about anything handwriting-related please get in touch with me at: nicky@betterhandwritten.com

or on Twitter: @nicky_parr I'd love to hear from you :)