We Need to Talk About Pen Licences

How do you feel reading this?

Would you qualify for a licence? Would you get to keep it?

Are these realistic expectations?

What unconscious messages are being transmitted?

How do you think children feel about their ability to ‘pass the pen test’?

So many questions... sorry!

Of course children who acquire fine motor skills relatively easily and whose visual perception allows them to navigate lines effectively will be fine. But they would be anyway and that’s by no means the experience for many children.

I think we need to talk about pen licences.

I’m fascinated. As I read the above examples (and many others scattered across the internet), I felt a surprisingly powerful wave of emotion wash over me and my fingers actually began to tingle! Here’s what came to my mind:

If your handwriting does not meet the criteria… 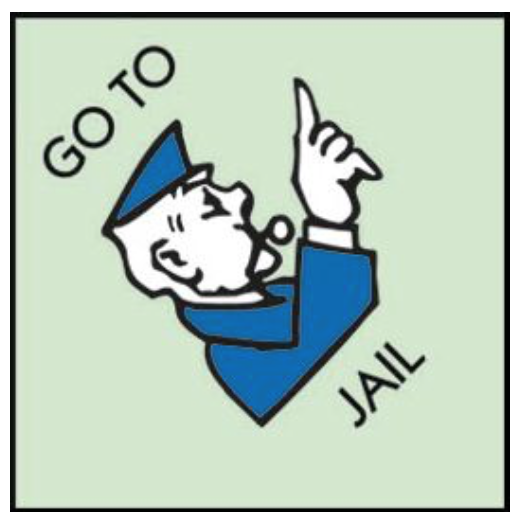 You’ll be fitted with a tag on release; if you re-offend, your pen privilege will be revoked and you will be sent straight back to Pencil-ville Prison (see my word play on Pentonville Prison?)

It might sound a little dramatic but haha, that’s what surfaced! The frequency transmitted from the policies felt loaded… so heavy and full of judgement.

Maybe I’ve just heard too many stories about the damaging and long-lasting negative impact on those who were last in class to get their pen licence or indeed never did.

Maybe I’ve felt too much distress and anger during conversations with parents who have seen their child’s self-esteem plummet when they are not deemed worthy of the right to write in pen. When they see their child lose hope, feel ashamed and embarrassed.

Maybe I'm too aware that the teaching of handwriting is often not really understood or delivered effectively so it's impossible for some children to achieve these demands.

Maybe my brain has encoded the concept as something that has an unwitting potential to threaten or hurt and a protective instinct kicks in.

Whatever the reason, I felt strongly as I read.

I feel strongly. About pen licences. I don’t like them. I don’t think they are necessary and I believe the damage potential far outweighs the benefit of motivation potential.

I know opinion is divided and why... so let’s talk about it.

If you feel they’re a good thing (or are indifferent) would you be open-minded to considering an alternative opinion? We can always agree to disagree.

The longer I work with people around handwriting, the more I come to understand just how deeply emotions are connected, felt and remain. My client work becomes about so much more than how letters look on a page. In my experience, when pen licences come up they frequently trigger an outpouring of angst or anger.

Before continuing I probably ought to clarify what a pen licence is!

It’s usually a certificate or wallet-sized card (similar to a driving licence) used by some schools - still many schools, judging by a quick search on Google - to incentivise pupils and mark their transition from writing in pencil to pen. 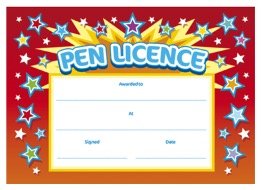 It’s a very public comparative judgement. While the certificate itself may travel to the relative privacy of a fridge, bedroom wall, drawer or bin, the day-to-day writing implement permitted serves as a daily reminder and mark of that judgement.

I have to be honest, when I asked on Twitter how people felt about ‘pen licences’ a week before writing this article, I wasn’t expecting so many to vote: 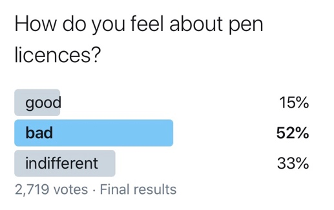 One of my favourite quotes comes from German philosopher Friedrich Nietzsche: ‘There are no facts, only interpretations’.

So let’s consider the interpretations of good, bad and indifferent.

“My class love them! I introduced them this term and the children have responded so positively. Handwriting has really improved.”

This is the kind of comment I sometimes hear. It doesn’t surprise me and I get it. Children generally love challenges and the prospect of reward and recognition. A pen licence is a carrot being dangled in front of them as motivation and inspiration.

To this end it will initially activate the Reticular Activating System (RAS). The RAS operates as a filter for what should be processed and prioritised.

To begin with everyone appears motivated. Improvement is apparent as attention is focused. As time goes by though, as some children achieve but others don’t, as attention inevitably moves on to other things (the teacher’s as well as the child’s), the carrot too often remains out of reach. Particularly if teaching and feedback isn’t specific and delivered systematically, consistently and with understanding of all that’s involved in the learning process for handwriting. Cognitive overload related to tasks and time demands can often see children stuck, unable to affect change and with feelings of failure, frustration and disappointment.

Still I do understand why some people might see the model as a good one though:

“Max was last in his class to get his pen licence. He went from loving school to not wanting to go in and the very thought of writing made him angry. It made me angry. We were told handwriting improvement would just come if he practised. But it didn’t. Handwriting became a four-letter word in our household. I felt we were completely let down.” - Parent

I can understand why people see the model as bad (and include my own perspectives here):

About 900 people (33%) were indifferent about pen licences.

I can understand this. If you’ve never had any particularly positive or negative experiences around the concept the chances are it’s not been on your radar to consider. It was good of you to even vote to be honest. If you’re indifferent I’m guessing it seems like it could be a good idea on the face of it but you’re open to recognising it might not be for everyone?

Maybe your opinions have shifted a little after reading.

I’m grateful to everyone for taking the time to read and reflect.

Please come and talk to me about it. Whether we agree or not, I’d love to hear your experiences and opinions.