“ k can be quite a tricky letter,” I explained in one of my feedback videos. “Let’s have a look at how you’re forming it now, then I’ll show you three ways I’ve found other people like and that work well when you want to join up.”

As you can see (and as is often the case with many letters I look at) 6-year-old Ella had developed her own representation of ‘k’ as she had perceived it.

Here are the alternatives I modelled for her in a demonstration video so she could follow HOW they were formed. She experimented with them and decided she liked the top one best so that is the one we stuck with and practised. 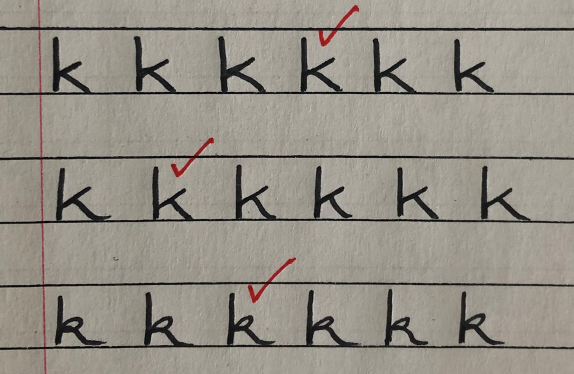 In my blog  Perfect :) I said I’d come back to think more specifically about individual letter formations and who gets to decide what is ‘correct’ and ‘without fault’ * when it comes to handwriting. I think this is where some of the confusion and frustration around handwriting judgement arises.

Here’s some background to the issue:

On a very simple level, when a child forms a particular letter, they create a neural pathway in the brain. That pathway is strengthened through repetition and eventually the brain automates the process, freeing up working memory for new thinking.

I get children to imagine crossing a field of tall grass. 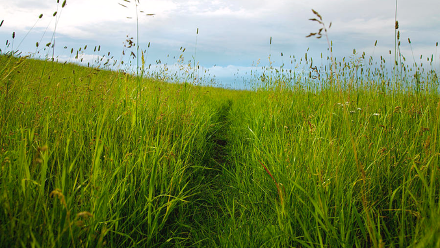 To begin with it’s hard work treading down the grass but, after crossing a few times, it gets easier. Eventually (after crossing many times) a clear, definite pathway forms. They now barely notice it as they’re strolling along, and their thoughts are free to turn to other things like what they fancy eating or what game they’re going to play with their friend when they get to the other side of the field.

This is what it’s like with handwriting (or developing any other skill or habitual thinking for that matter). Repetition leads to automation. The unconscious mind takes over.

To replace an automated formation the new version must be practised to the point where the new pathway is strong enough to supersede the existing one. This takes time of course and is the reason children revert to ‘old habits’ like reversals or spelling mistakes no matter how often they are ‘reminded’. They simply haven’t had the opportunity to practise enough. Little and often is key to success.

(It's also the reason I STILL revert to typing in an old password when my thoughts are elsewhere as I log in!)

Now here are the issues relating to ‘perfect’ handwriting:

The thing is, very specific teaching is effective...

Very clear, specific formation of individual letters (and then ways to join them) supports reinforcement of the pathways.

I teach this way. I give choices where appropriate and explain (very simply) what’s happening in the brain; once we’re agreed though, we stick to it and I help children notice tiny details between formations and positioning.

Today for example, I'll be helping this 9-year-old notice the difference between his y and mine... 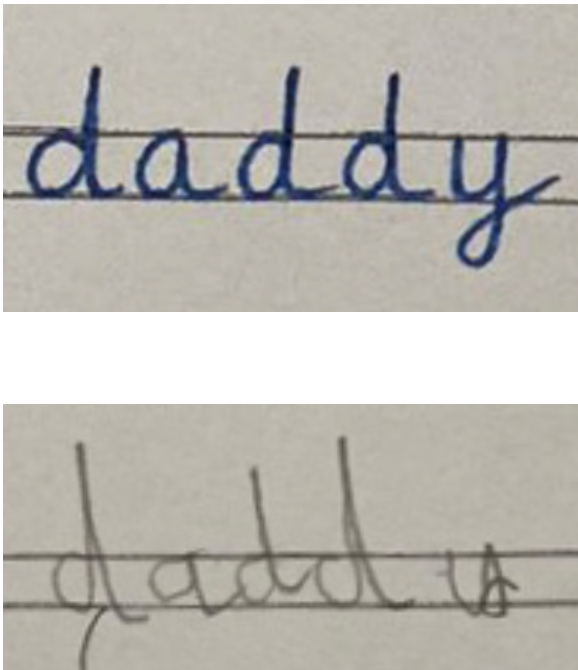 I guess this could be seen as imposing my judgement of ‘perfect’ handwriting; the fact is, letters need to be clearly identifiable so they can be read.

He'd chosen between these 'y's:

Once a decision is made I structure the process of repetition. Practice then allows the pathways through the field to become clear (automated) so that - in time - the writer is free to run around and play with their thoughts and words… expressing themselves without worrying about judgement of their handwriting or whether someone will be able to read it.

I talk about this to children often. I help remove stress and anxiety.

Ultimately part-cursive has been shown to be the most time-efficient script; I explain that we learn all the useful joins so that later on they will unconsciously decide which letters they do and don’t join when writing at speed.

I also remind them that once they’ve established a fluent, cursive script they feel good about they can have fun evolving their style and experimenting with alternative formations … adding little touches of personality! They’ll end up with different styles for different audiences and purposes.

For me, ‘perfect’ handwriting, that is ‘complete and correct in every way, of the best possible type or without fault’ * is that which:

To this end I think it’s the job of Primary schools to give time and focus to developing a fluent, automated cursive script and that Secondary schools should then take up the baton and support the evolution of personal style and practical application. My goals are applicable to both settings.

I agree schools should have a consistent approach. That doesn’t mean following a scheme blindly. It’s okay to offer alternative formations. Nor does it mean forcing all teachers to write in the school's adopted script. Although this is helpful for demonstrating and many teachers choose to develop it, there are other ways to model formations to children (using the Better Handwritten videos for example). Teachers simply need to explain that they were taught and automated a different style when they were younger. They shouldn’t be made to feel bad about their handwriting. If they don’t feel good about it they can change it but if they’re happy with it they shouldn’t feel judged or criticised.

They DO need to understand how to teach handwriting well.

And they need to be aware of the powerful impact their interest or disinterest has on students.

One of my daughter’s friends came to stay last year; as we were chatting it became apparent that (aged 19) he had NEVER received a handwritten letter. Birthday and Christmas cards - yes – but never a letter.

We became pen-pals! Sometimes he's expressed worry that I’ll judge his handwriting negatively (because of my work)… his formations and joins are not as I teach but he’s not a child learning and I can tell you, I think his writing is perfect:

AND it makes me smile every time I see it on an envelope on my doormat :)

What makes handwriting perfect to you?

For more information on developing handwriting or the teaching of handwriting get in touch with Nicky at: